N.B - The whole game is available in the YouTube video at the bottom of this report.

This was fun. Extremely. Yes, it was only an admirably naive Vietnamese national team, and yes it was only a friendly, but at times City were simply irresistible. It felt like we were witnessing a glimpse of what the future holds. Truly, and maybe finally, the holistic ideal in full flow. The football we played felt vibrant, dynamic and skillful, with a forward line blessed with potential and youthful zest. Kelechi started as the lone striker, flanked by Sterling and Navas with a midfield three of Garcia, Silva and Evans pulling the strings. Denayer started alongside Mangala with Sagna and Kolarov the fullbacks with Hart in goal. From the off it was was entirely one way stuff as City attacked Vietnam with vigour and energy. Excitingly, alongside two more excellent performances from Sterling and Silva, the kids were the stars of the show.

Iheanacho was magnificent - he's more than just a finisher. There's a real finesse and intelligence to his game, evident in his link up with Sterling in particular, interchanging frequently with lovely little one-twos around the box. One such moment brought Sterling's second goal of the game, his first being a delightful 25 yard curler into the top corner, as the former Liverpool man raced onto a delightfully weighted return ball from the precociously talented Nigerian before slotting past the keeper. It was highly promising, showcasing the vast array of talents the 18 year old possesses. He's a real prospect, make no mistake. We have ourselves a gem here, and as it stands he's likely to complete his elevation to the first team come the first game of the season - both Aguero and Bony will be desperately lacking match fitness and it wouldn't have gone unnoticed how strikingly natural and effective his link up play has been with Silva and Sterling. Pellegrini isn't stupid, and Iheanacho would oddly be much less of a risk against West Brom at this stage than the other two would be. He'd deserve the chance too. 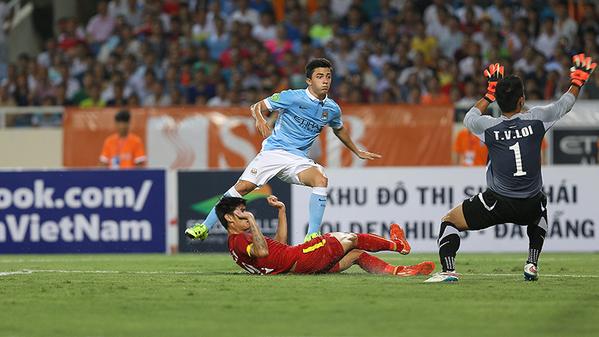 Not to be outdone, Garcia yet again shone. Easily the breakout player of this tour, remarkably he looks more at ease with the first team setup than he does with the academy lineups. Don't get me wrong, he's shown his enormous potential with the youth teams, but only sporadically as he's often blown hot and cold at that level with games sometimes tending to drift by him a little. This just hasn't been the case this summer. He's been involved in more or less everything we've done, confidently relishing the added nuance and calmness that the likes of Silva, Yaya and Nasri bring to the team. As the excellent Chelsea Youth pointed out on twitter, elite prospects often develop best in elite environments alongside elite players. Garcia fits this scenario perfectly. Where's best to learn all the tools he needs to perfect his game at the very highest level than alongside the players on the training pitch that he clearly wants to learn from? There's a huge argument to suggest that loans away would arguably stent his development, and its understandable - maybe he'd simply be better off where he currently is. Either way, Pep's going to love him in a years time, allegedly. We all are.

Elsewhere, there was exciting cameos from a number of other EDS players. Marcos Lopes had yet another effective game, once again arriving in the second half and immediately impressing with his directness and ability to run at defenders with power and pace. He scored too, skipping past one Vietnamese defender and drilling the ball under the keeper, who maybe should have done a little better. It was a deserved goal for his performances in general over the past two weeks. He's been excellent. It was another new signing, and yet another exciting and nimble young forward that gave Lopes that chance initially - Patrick Roberts, the much vaunted acquisition from Fulham, showed exactly what he's capable of as he skipped past two challenges cutting in from the left-wing before feeding Lopes to do the rest. Lovely stuff, and encouragingly just one of many similar moments throughout the game from players of all ages and seniority. It was notable how players such as Silva and Garcia seemed to love having the likes of Lopes, Iheanacho, Sterling and Navas running off them. We've maybe at times lacked a little directness in the first team, often lacking someone willing to run at defenders with purpose and endeavour, and all of a sudden we've numerous options. Just like that we've developed a plan B, and that can only be a good thing. And who knows, De Bruyne may be yet to come. 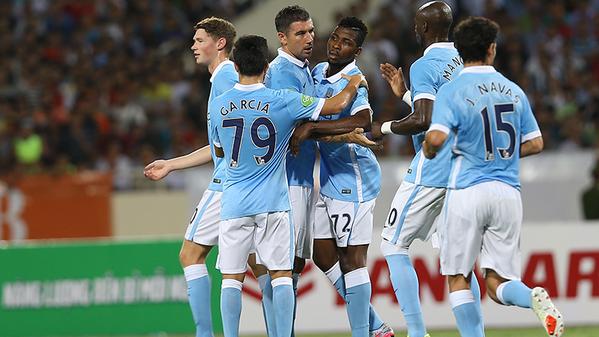 George Evans clocked up another good shift in a friendly, keeping things ticking over in midfield, confidently and purposefully spreading play - flying into  few tackles too. It was a decent performance, though in truth, he was never wholly tested as City controlled the game for the vast majority. Likewise, Denayer had it relatively easy, never really needing to get out of first gear, mopping up where he needed to as and when it was required. Jose Pozo found time to add the eighth, impressing in a short cameo full of creativity and intelligence, as he raced onto a lovely through ball by Marcos Lopes, evaded one challenge before delightfully dinking the ball over the onrushing keeper into the far corner. Sumptuous. There was also late appearances for Cameron Humphreys, Bruno Zuculini and James Horsfield, but none of them had much to do on what was a highly satisfying night for the club following on from some equally memorable performances in Australia. This has been a good preseason for all involved, undoubtedly. The club can take a lot from this, and there's definitely a renewed vigour about the squad as the season approaches. There's energy there now - ideas and a little spark too. Young players will bring that. It'd be criminal if a fair few were not involved next season. They certainly deserve a chance. Next up - Stuttgart this weekend.

Posted by Steven McInerney at 09:02