The second instalment of this three part feature looking at the EDS and returning loanees out on tour with the first team in Australia. After previously taking a closer look at Gunn, Evans, Lopes, Zuculini, Humpreys and Enas Unal, this time its the turn of three Spaniards and two Manchester lads. All. All were involved in yesterday's behind closed doors friendly against Adelaide, and from what I've read and the brief highlights available online, they seemed to acquit themselves well. Barker took the headlines, scoring his first of what is hopefully many, many goals for the first team. Maffeo was typically Maffeo, composed and positive and the others put in good shifts in what was more or less a training game, in all but name.

I suspect most will be get minutes at the weekend as they take on Melbourne City, our newly acquired sister club. With any luck it might tell us a little thing or two about what to expect this year. I'll be writing some thoughts up after the games as per usual, and the final piece of this particular jigsaw will follow tomorrow night with a look at centre-backs Ellis Plummer and Jason Denayer, fresh from signing a new five year contract with City, two vibrant and energetic midfielders in Olivier Ntcham and Bersant Celina, and finally, and most certainly not leastly, our Nigerian wondered - Kelechi Iheanacho.

The Spanish really do have a knack of producing exceptionally gifted young footballers don't they? García is yet another majestically talented prospect. He's wonderful. There's no point hiding from the Silva comparisons as they're striking. Both make the game look easier than it is, gliding about the pitch elegantly, dictating play and demanding the ball as they flit between the lines. Both are deceptively strong for their size too. He may be small, but he's tough and tenacious - one of the reasons why he handled the step up to the EDS so well. He's another that is still only seventeen, yet he went from being eligible for the u16s at the start of last season to becoming something of a regular for the u21, even finding himself selected for the first team's post-season tour to America where he made his debut, replacing David Silva of course. It's been a quick progression, but his talent has demanded it. There are still rough edges, naturally, and he's not always fully capable of totally exerting himself on a game, but he can, and he will given time and experience. Put it this way, it's highly unlikely that Silva was the same immaculately perfect footballer that he is now when he was seventeen, and it's unlikely that he was much better than García currently is either. Yaya wasn't as accomplished at being the exceptional playmaker that he is now when he was younger, neither was Pirlo or Xavi. Those who play that kind of game tend to come into their own after a couple of years around the first team usually. García is a player cut from that very same, and very special, cloth. Thankfully, City clearly know that.

It was a mixed season for Pozo. It should have been great - he made three appearances for the first team during the injury hit winter months, and he scored on his debut for the first team weeks earlier, notching the sixth in a 7-0 rout against Sheffield Wednesday. He was a pretty frequent member of the first team squad, yet despite this it still felt a little unsatisfying. For all his efforts and endeavour the magic that marked him out as something potentially special for the youth teams wasn't necessarily on show. Being played out of position didn't help - he spent the vast majority of the season for the EDS playing through the middle up top. For all of his talents, he's clearly not a centre-forward. He's not particularly strong, lacking the tenacity to hold the ball up and bring others into play. His appearances in the first team and the EDS usually found him up front alone against hugely experienced and towering centre-backs all too willing to go straight through the back of him, and they did. Often. It was a relatively sobering experience for the nineteen year old and, brief glimpses aside, his form notably dipped for Vieira's u21s. There's clearly ability there, and when he does get the chance to play in his preferred position, just off the striker and facing the goal, his positives do come to the fore. He's clever, skilful and capable of the intricate give and go football often perfected by Nasri and Silva. He showed glimpses of it too in the post-season friendly against Toronto where he linked up well with Aguero and Silva, buzzing with menace and intent. It just depends on whether he'll get that chance in that much coveted position where City are hardly lacking in options. It seems unlikely any time soon. Some solid performances in pre-season could put him in frame for a much-needed loan away from the club for a year.

Already making his mark on the tour, Barker scored his first goal for the first team in yesterday's behind closed doors friendly against Adelaide. It was typically Barker too - cutting in and dropping his shoulder, before drilling the ball into the far corner out of the keeper's reach. Something that's become a bit of trademark of his after last year's efforts. He rose to prominence during last season with a string of exceptionally exciting performances for the u18s and the EDS. He's quick, very. Genuinely two-footed too. A rarity in this modern game, and a trait that only goes to highlight his technical excellence. There was times last year when you were sure you were watching the future of City's left hand side as him and Angelino tormented teams down their side of the pitch. And we probably were. There's an intelligence and understanding to their game, both interchanging positions and covering as the other went forward that's rarely seen today. It bodes well for the pair of them. City know they have a talent here, and I'm almost certain he will get a chance at some point. You don't let a quick and unpredictable, two-footed goalscoring England u19 international, born less than a mile away from the ground, go without a real fight. He's too good for that. In another generation he might have already 40 games for the first team. If we weren't the club we were today, blessed with world-class talent in all positions, he'd probably have been something of a regular already. But that's the state of play at City, and so be it. The barriers to entry are a lot greater, but Barker's got as good a chance as any breaking them down.

Horsfield's inclusion admittedly came as something of a surprise to me. He's been at the club for what feels like forever, but often found himself looking from the outside in as others took the headlines for the EDS. He deserves a shot though for his sheer persistence. He's a hard-working, reliable player, perhaps not quite up to the levels of some our footballers technically, but then again not many are. He's solid though, a real functional operator and still a talented young player who will forge a good career in football. Preferably a central-midfielder, he's found opportunities a little limited in that role for the EDS recently with Ntcham, Glendon and Byrne usually ahead of him in the pecking order. He's looked most comfortable, to me at least, when he's been asked to step into the right-back role where his natural tenacity and energy comes to the fore. If i'm being totally honest, I'm not sure he has a long term future at Manchester City, but then again I'd love to be wrong. It wouldn't be the end of the world. He's had an education that most youth players could dream of. You only have to look at Kieran Trippier too to see that some take a little longer to establish themselves, growing into their skin as they work their way through the ranks at other clubs. With players moving up through the academy ranks and competition fierce, and his 20th birthday approaching in November, I can see him using this season to go out on loan, taking an opportunity to assess how far he's developed at the club. Competitive football is required for him and with Maffeo currently ahead of him at right-back and a whole host of midfield options fighting for that same chance, realistically experience elsewhere would be ideal for him. This tour could be a great little opportunity to earn himself that chance.

Maffeo deserves this, he truly does. Nominally a right-back, he spent the vast majority of last season playing at the heart of defence for Vieira's u21s, despite only being 5'8 and seventeen years old. It was clearly a move designed to test him physically, and he shone. He reads the game wonderfully well, shifting his body weight to position himself between the ball and the attacker, frequently coming out the victor against players considerably bigger than him. He's truly a natural defender. One of the most defensively accomplished fullbacks I've seen in a long, long time to be honest. There's an intelligence and composure to his game that makes him a stubbornly defiant opponent - he's incredibly hard to beat, and though he won't spend his career in the centre of defence he's clearly a better player for that experience. He gets forward well too, a prerequisite for any modern fullback. Possessed with boundless energy, he's an excellent technical, footballer. Typically Spanish in that aspect, and though he's maybe not quite as flamboyant as Angelino over on the left, he's still a threat, capable of bustling into attacking positions in an almost Zabaleta-esque fashion. And like Zabaleta, too, he'd run through a brick wall for you - he's a tough little bastard and it's admirable. I listed Maffeo as one of my players I'd like to see given a shot at first team football somewhere this year in a piece last week, and I stand by that. He's remarkably mature for his age, physically comfortable and an exceptionally fast learner. Given first team football for a year, I'd not be surprised if he came back and claimed the right-back position as his own. I love Pablo Zabaleta, I really do, but he's not getting any younger and Maffeo is our future right-back. He's that good. 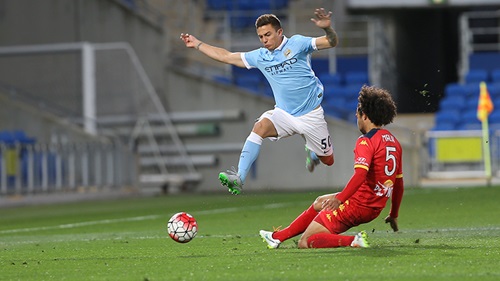 Posted by Steven McInerney at 12:01